10ish ways to explore your network with Suzieq

Suzieq is new software for Network Observability. In this blog I will be going over some of the things you can do with Suzieq to help you explore and understand your network. We have suzieq-data that you can use to investigate Suzieq. This databases has data from all the different scenarios available in https://github.com/ddutt/cloud-native-data-center-networking

We are going to go through specific things you can do with Suzieq, to give you good ideas of how you can start using it in your network. We will cover more topics in other blog posts, such as asserts which are a powerful way to have Suzieq check that you have a healthy network.

All my examples in this post are Cumulus Linux because it is by far the easiest Network OS to run virtually to try these experiments out. Suzieq analysis does not care what OS it’s working on.

Namespaces are the way to group devices in Suzieq. These groups allow analysis of devices together. Namespaces also allow overlapping device names between namespaces. When you configure the sq-poller to collect information from your devices you decide which devices are in which namespace. To see the namespaces you have in a Suzieq database: 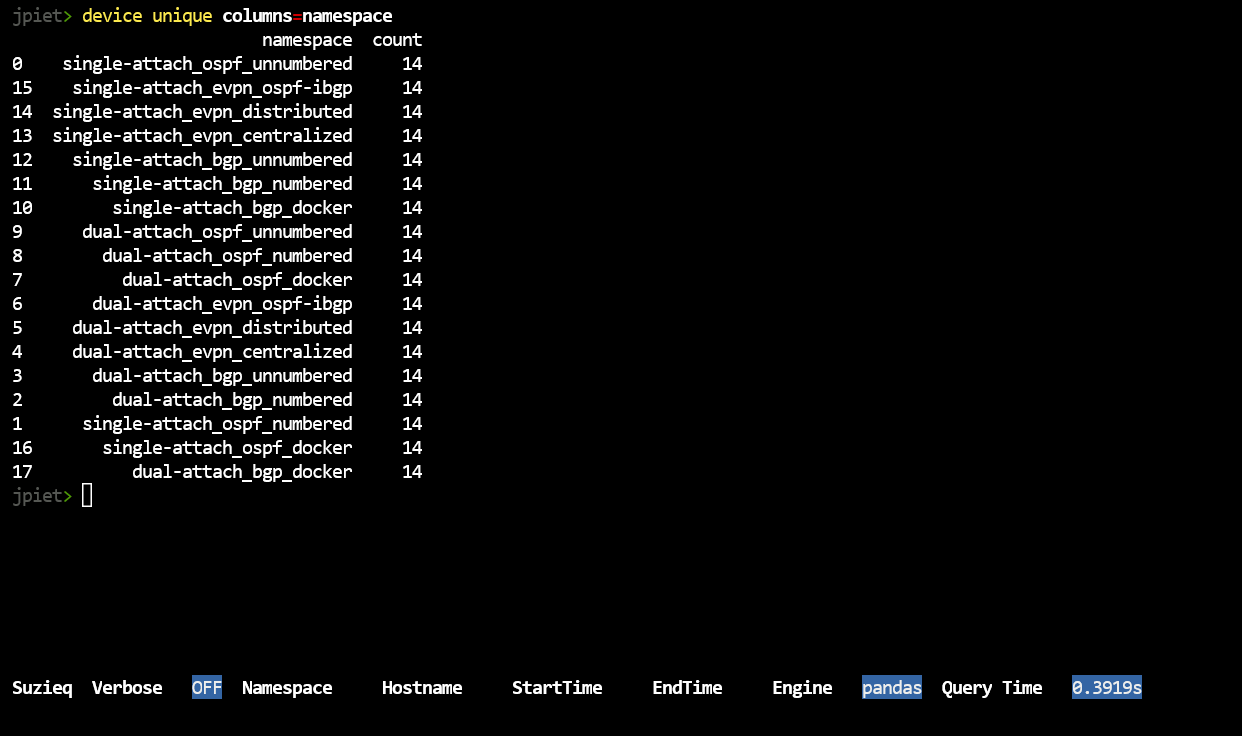 This also demonstrates the way that the suzieq-cli works. We have different objects (also called commands) just as device, then we have verbs for the objects (such as unique) and then filters for the object/verb pairing. Most of the commands have a standard set of verbs, which are ‘show’, ‘summarize’, and ‘unique’. ‘unique’ requires the ‘columns=’ filter to find the unique entries in a column and the count of the number of times that the entry occurs.

To see all the commands, type: 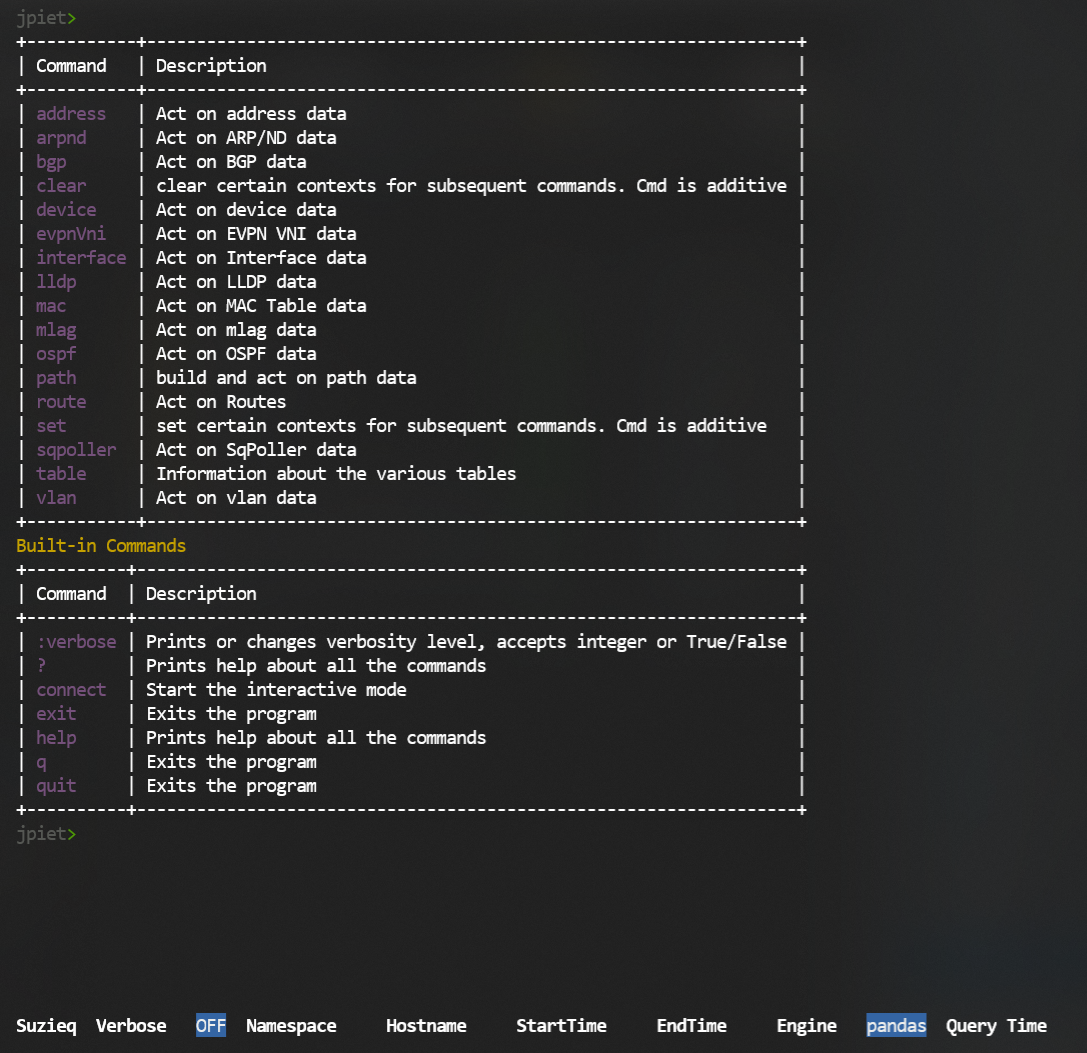 Let’s continue by looking at the data we have in the database. To see hosts in a namespace 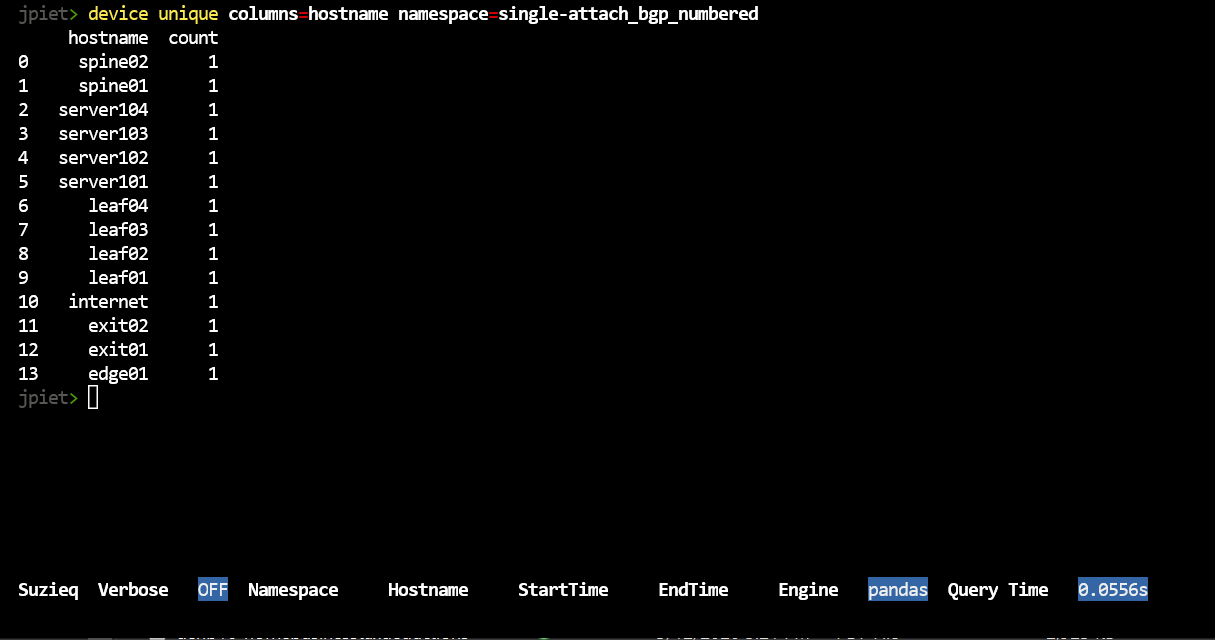 You can also look to see more information about the devices that you have.

The show verb is the most basic verb Suzieq has, showing the data directly. It displays a lot of information for the command. For each command Suzieq has a default set of columns that are displayed, but you can choose to display less or display more, using the ‘columns=’ filter. ‘columns=default’ gives this default view, ‘columns=*’ displays all the columns and ‘columns=’col1 col2’ would display the col1 and col2 columns.

You can see how many columns and what are the defaults using the ‘table describe’ command.

Now that we have a little bit of understanding of what data we have, let’s dive into one namespace. Let’s start with an overview of BGP.

In any of our summaries, statistics that end with Cnt, such as uniqueVrfCnt, if there are three or less of them, then we break out the items and provide their count. In this example, there are 2 uniqueVrfsCnts, which are default and internet-vrf. Statistics that end with Stat, such as upTimesStat, shows lists of three items bracketed in [] show [min, max, median] of the values to give you an overview of the distribution. For any of these values, you can use the ‘unique’ verb to dive into the column and see the whole list.

For instance, notice that there are 2 session that have failed, let’s see what those are.

No, that didn’t work this time. However, it is interesting that the lastDownTime is 0. That means it’s never established correctly. Ok, let’s try bgp assert. In other blog posts we’ll cover assert more thoroughly, but to understand this problem let’s try it. 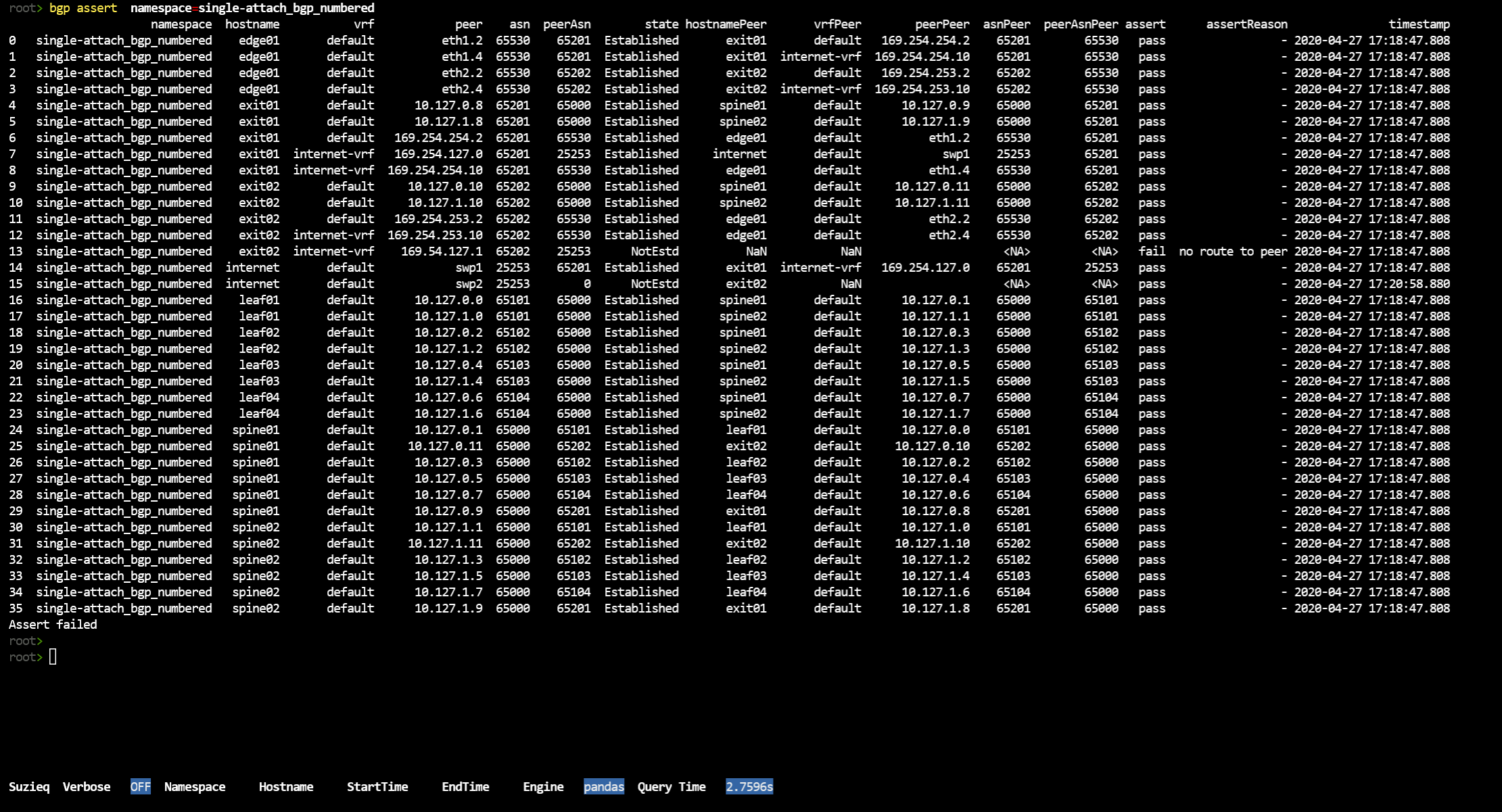 So that’s a lot of output. We’d like to filter on just those that failed, Suzieq doesn’t have an option for that yet, so I just filed an issue.

Here’s a screen shot of just those two (plus an extra).

We can see that the first one failed because of no route to peer. The second doesn’t give us an assert failure, however you’ll notice that the first failure is exit02 to 169.54.127.1 and the second one is the internet device trying to connect to exit02. So this is probably each direction of the same failed BGP connection.

We also want to understand what the ASNs are. Dive into the ASNs and Peer ASNs 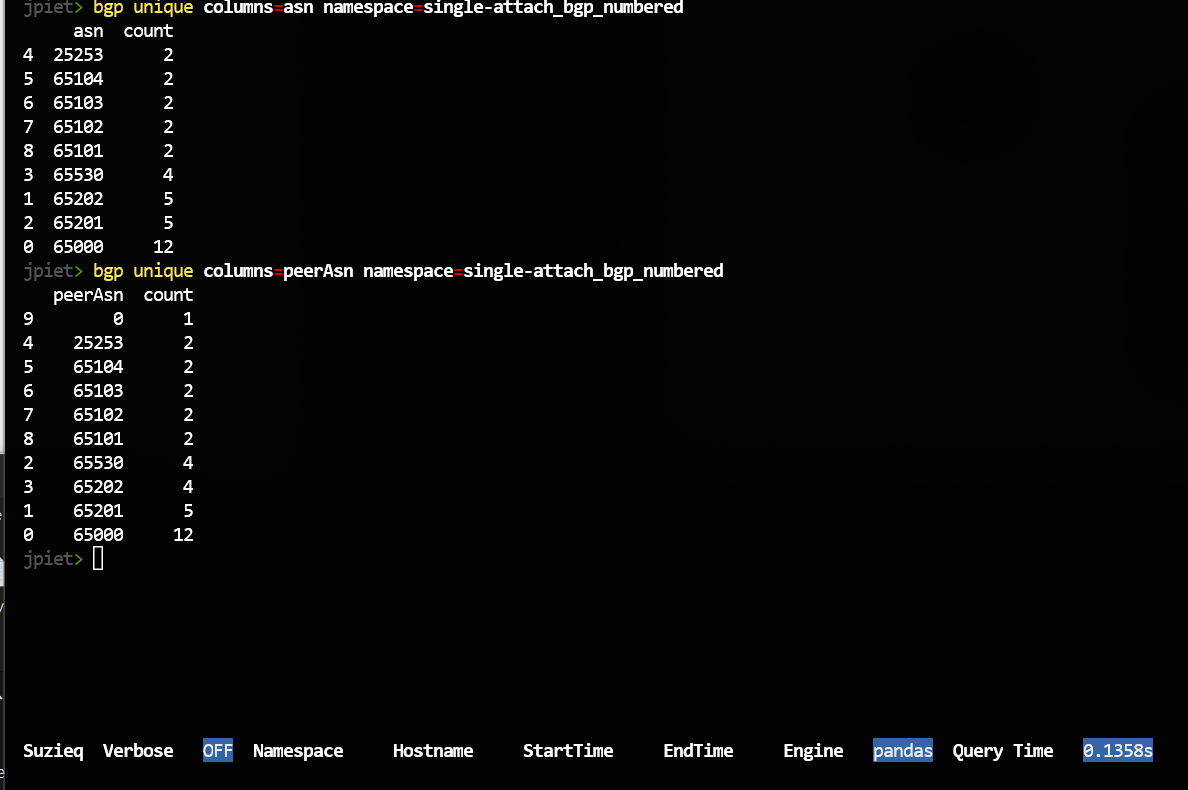 One mysterious thing is what is peerAsn 0? From above, that is one of the failed BGP sessions. You also might notice the counts columns. These are the counts of BGP sessions for each of the ASNs.

Let’s now take a look at the route command. We’ll start with summarize.

This has data like we saw in ‘bgp summarize’, and we want to dive into what these mean. This shows the routes for each device summed together. Let’s use unique to dive in. What are the Vrfs in your network?

This shows a bug we have in Suzieq right now, where evpn-vrf is not in this namespace but it is showing up with a count of 0. That count is correct, we shouldn’t even be displaying evpn-vrf. We’ll fix it soon, but this is where we are right now.

Another thing you might like to look at is which devices have no default route, since the summarize showed hostsWithNoDefRoute = 2. Suzieq doesn’t provide a way to do that at this time.

Let’s move to looking at protocols, as you notice, we have four protocols.

These might look mysterious to you. These are consequences of using Cumulus Linux as well as Ubuntu 16.04. Blank protocols are usually DHCP or mgmt interfaces. Kernel routes are connected interfaces or static routes.

I’ll just look up protocol 186. You can look up the others.

I can log into a Cumulus Linux device and look up 186, and it’s BGP. I think the this version of Ubuntu doesn’t read that and report the protocol as BGP.

With so many routes, it’s good to be able to dive in. One way is to see what routes are available using filtering by prefixlen. 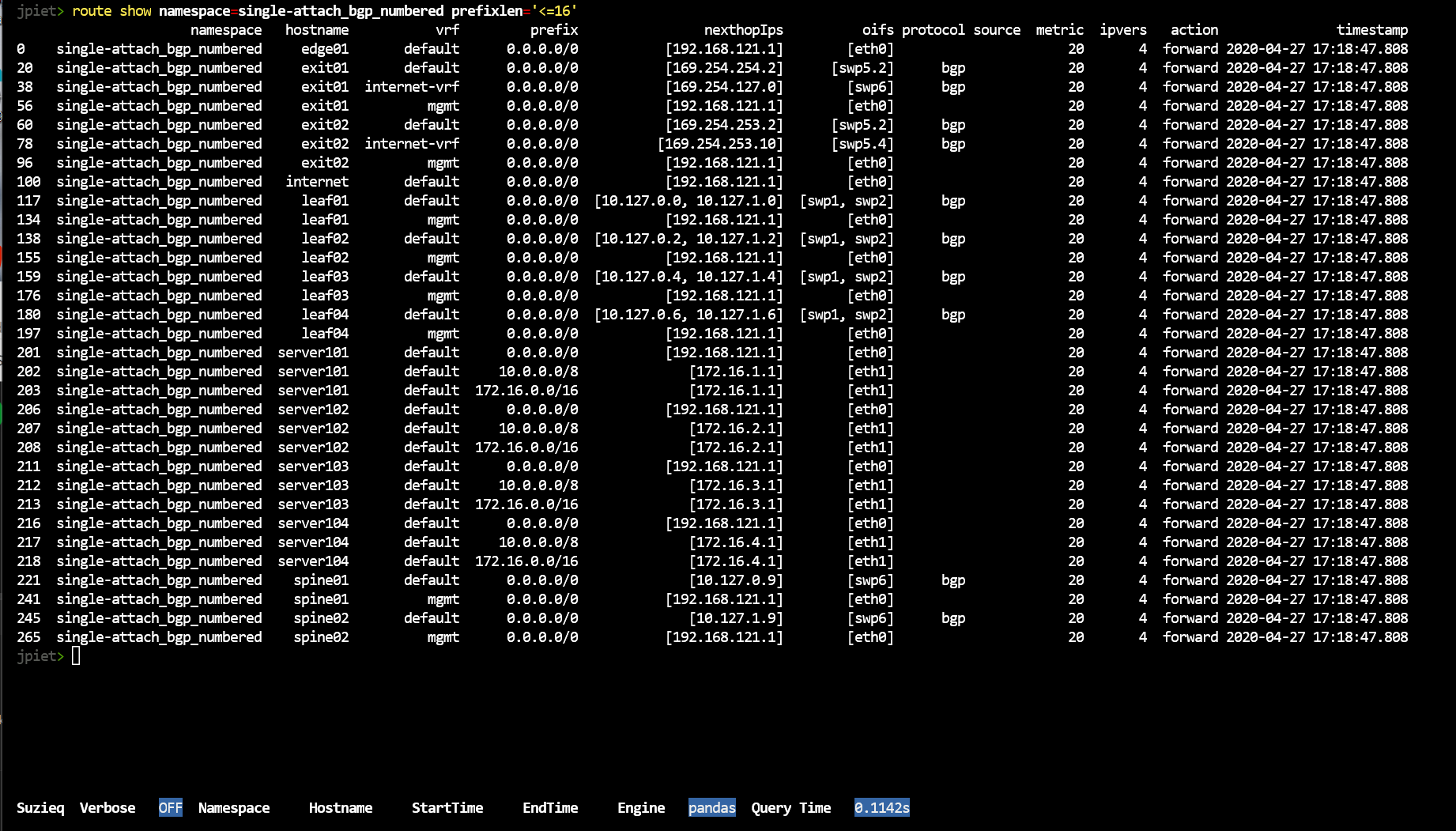 We’d also like to see where an address comes from look. Route show, shows all the routers that this is valid on. Address show shows the origin.

Nope. Suzieq can’t do that yet. I’ve created an issue for that, let us know in comments on that issue if you also want that added sooner than later.

Hopefully this has shown you how to use Suzieq to explore your network. This focused mostly on using summarize and unique to get an overview and then to dive in. It also demonstrated some other filtering that can be done for you to understand your network. I didn’t cover all the things you can do with Suzieq, for instance we didn’t explore any of the OSPF or EVPN commands, and I didn’t cover asserts. We’ll be covering more of that in upcoming blog posts.