I care a lot about network design. I think it’s too hard to design networks well and I think that all the tools necessary to do it well don’t exist. At least I haven’t seen them. The lack of tools affects the biggest networks, but it affects all networks. I am especially concerned about how to design networks that are easy and safe to operate, which requires a network that is understandable. 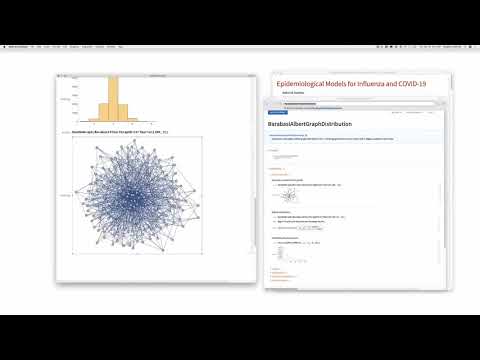 I like to learn from other engineering disciplines. In this video, Stephen Wolfram is learning Epidemiology so that he can model Covid-19 infection rate. If you don’t know who he is, he got a PhD from Caltech in Physics at age 20. He created Wolfram Research which produces Mathematica and he has been the CEO for more than 30 years.

You don’t have to watch the whole thing :), even in the first 5-10 minutes it’s pretty interesting. It’s fascinating to watch him learn by trying out different mental models he already has to see if he can apply them to this new problem. He starts with a very simple mental model of how to understand the problem. He then types in a small equation, then he does another equation which models a small worlds network, etc. From these small experiments which don’t take very long he gains some important intuition about the problem, including that the initial conditions change the results significantly. I have no idea if he understands how to model Covid-19 infection well, that’s not the point, the point is about how he easily uses his tools to try out different models to learn how to think about the problem.

I want this for network engineering and design. I want engineers (including me) to be able to try out new design ideas so that they can get an intuition about how to design networks. I’m not sure we can ever get to the speed that Wolfram tries out ideas in this video. However, I’d love it if we could get to one day from ideas to trial. And then one hour and then maybe 10 minutes? I don’t know. Just always getting better. Wolfram’s problems lend themselves to math; he’s been working on how to model physics and other science processes in languages most of his life, so he has some advantages, but that doesn’t mean we should give up before we start.

Here are some examples of experiments I’d like to be able to try:

Let’s image how this might look. I want to compare OSPF vs eBGP in a 2 tier Clos network with 8 spines and 32 leaves. I type a command to create the topology. Then I add IP addresses rules. Then I add OPSF to the topology. Finally I add a series of tests to stress the topology and tell me stats about how it converges. I then do all that again, but instead with eBGP. I’d also like to be able to pick from a catalog of different design options so that I don’t have to define everything myself. Wolfram gets to easily pull different networks and different models from a pre-existing catalog.

While the GUI is important, Wolfram is using a computer language to describe what he needs and then it is drawing picture. He writes about how important a computation language to the problems he’s trying to solve. We need a equivalent language or set of tools. It’s not enough to just say do it in python, there at least needs to be a good set of abstractions and a framework to use them.

What can you do today

Getting to this sophistication to work is going to take a long time. Right now I would settle for being able to create the two different sets of configuration easily and then compare them. I’d like to be able to describe the topology, addressing, and routing easily, and then get out configs. Maybe not just a couple expressions on a nice GUI, but even writing YAML and running a command line. Then if I could spin up network simulation and getting running instances of these topologies. Finally, I’d need some kind of test suite to stress the topology and give me those stats.

There are some pieces to this puzzle that exist. Using vagrant or (GNS3 or Eve-NG) to emulate networks (https://elegantnetwork.github.io/posts/Network-Validation-with-Vagrant/) is an important piece. Using Ansible (or salt or Normir) to push automation configuration. There is no way that I know of that will allow me to easily describe whole network configurations that I want

Tools like Suzieq (Suzieq) allow you to understand what your simulation is doing in a easy way. One of the problems with trying to different network designs is that networking is a distributed problem and it’s hard to get your mind around what is going on. Understanding your network in a holistic way is the point of Suzieq. Try it out.

While there’s not directly a catalog of options like Wolfram, my partner Dinesh has started with some useful topologies to try out. He wrote a book, Cloud Native Data Center Networking and has a github repository in which you can download vagrant files to try out 18 different scenarios from the book. This is a great way to start getting and understanding of these concepts. Dinesh has been also consulting over the last 18 months. For most of his clients he builds them a vagrant network to simulate the ideas that he is presenting to them. These are successful, the clients like being able to understand and try out the concepts that Dinesh is talking about.

Another approach to simulation and verification is to use tools like Batfish simulate and check could make this simulation go more quickly, and they allow analysis to help understand how the experiment works.

I think the linchpin is a way to describe and generate networks. This seems to be completely missing. It’s too hard to come up with different designs and try them out. There is also the piece of describing tests and other assertions that must be true to know that a network is working. (I was calling this intent based networking, but that’s not how the industry is using that term, I need something else.)

We can start trying out new ideas and building intuition now. It’s not nearly as effortless as Wolfram using Mathematica in the video, but it is it’s possible and it’s a very important way to navigate complex fields like networking. I think that every network engineer could gain from having easy ways to gain insight about networks.

In the next post, we plan on talking about wrestling some of the vendor NOSes to simulate with vagrant. This is another piece of friction in our ability to understand our networks.

Try out Suzieq, our open source, multivendor tool for network observability and understanding. Suzieq collects operational state in your network and lets you find, validate, and explore your network.